So here I am, committed to writing, developing, playtesting and publishing a game over the course of the next twelve months. And I have no idea what I am going to do. That is not to say I don’t have an idea for a game, it’s just that I don’t have an idea for THE game – the one I want to write for this project. I have some fairly firm ideas about the kind of game I want to write, just not what it will be about. Let me lay out what I have;

1. Crunchy. I have done a bunch of fairly “rules light” games that involve plenty of hand waving, references to common sense, generic modifiers, that kind of thing. I want to have a go at somthing that has a bit bore grunt to it. Something with a bit more mechanical detail. This isn’t because I dislike “rules light” or anything like that – I just want to see if I can do something more crunchy. I would love some tactical combat options (manouvres, that kind of thing).

2. Character driven. I absolutely love the way Keys work in Lady Blackbird (and presumably Shadow of Yesterday, though I have not played it). I love the fact that they are one of the most important things on the sheet and everytime I have played the game (about 5 times now) they drive the players to act like the character. It is fantastic. I want to do somthing similar.

3. Polyhedrals. So, at GenCon Oz I picked up a couple of new sets of polyhedral dice. Really basic, plain colour (one set red, one set purple if you must know) dice sets. They have brought back a wave of nostalgia and I want to use them in my game design. This might be tough for me, because I really love the simplicity of single die-type mechanics. But I keep opening my draw and peeking at the simple plastic shapes with their clear numbers and remember fondly opening the red box D&D for the first time… maybe I will make a game meant to go in a box.

4. Genre-mashing. Perhaps still caught up on the wave of nostalgia, I would love to do a classic fantasy game, but not only is that genre already pretty heavily contested, there are a couple of new games about to burst onto the scenes too (Dragon Age from Green Ronin and Warhammer Fantasy Roleplay from Fantasy Flight). So I am looking for a niche, something a little left of centre. Something that mixes a couple of unexpected genres in an interesting way, or that hasn’t been done before… or in a while… or well.

So, to summarise, my game is; a crunchy, tactical combat, character driven game, using polyhedral dice to resolve conflict in a setting that may or may not be a successful mixture of a variety of genres. It is beginning to sound like I want to design D&D… oh dear.

I feel that this description successfully fails (?) to demonstrate any real design goals. As a consequence I am going to go back to watching commercial television (obviously where all good ideas come from) while warming up my fingers to post about the “Big Three” questions, over at the Stockade. 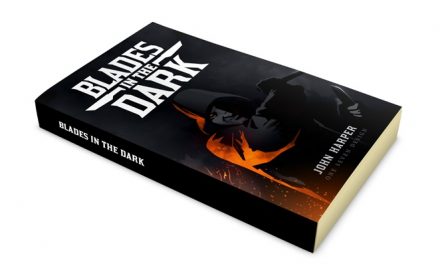