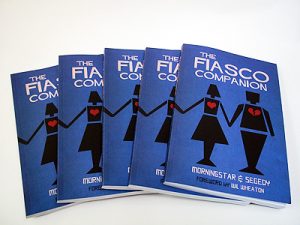 So, a while back Steve Segedy and Jason Morningstar from Bully Pulpit Games contacted me re my post on using the RPG Fiasco as a starting point for my NaNoWriMo novel. They asked me a few questions, I responded as best I could, and now I am totally chuffed to find my meagre words are included in their latest release, the Fiasco Companion. The Fiasco Companion is a resource for Fiasco players, offering advice on playing the game and overcoming common problems, and plenty of ways to hack the game. There are new Tilt and Aftermath charts and four new playsets. There is advice on creating your own playsets, too. All really useful stuff, written in a friendly, easy to read style and littered throughout with examples and advice from a variety of fans of the game.

The Fiasco Companion also has three chapters on taking the game “off the reservation” and doing something a bit different with it. The first of these provides advice on using the game with students, which just blew me away. As a teacher I am all for using games with students and this provides sound advice and plenty of ideas. One of the playsets is also designed to be “student friendly”. The second of these chapters is about using the game as a writing tool, and I will talk more on that in a moment. The third chapter discusses using Fiasco as a performance tool, drawing on it for improvisations and performance “preparation”. I am also going to mine this for my drama students. All three chapters are presented as a conversation or interview with people who have experience using Fiasco in one of these unusual ways, so you know it’s more than just a bunch of oddball ideas. They’re tested oddball ideas!

The chapter on using Fiasco as a writing tool is where my totally profound words of wisdom can be found. (You read the sarcasm there, right?) Luckily, I am backed up by the very cool Will Hindmarch (you can tell he’s cool by his profile picture) and John Rogers (who is a writer and executive producer of the TV series Leverage). Steve and Jason ask us a variety of questions about using the game to draw out ideas, conflicts and plot, and using Fiasco “solo”. I think the three perspectives provide plenty of “food for thought” for writers, though it is filled with useful stuff for all players as it reminds us the game lives and dies on interesting conflicts.

I have to say I was blown away to find myself included in this book and it took some serious scrubbing to get the childish grin off my face. Did I mention the book has a forward by Wil Wheaton. Yes, THAT Wil Wheaton.  Holy crap – I am in a book that also has words by the executive producer of Leverage, a co-founder of Gamplaywright, and Wil Wheaton. I’m in a book written by the guys behind The Shab-al-Hiri Roach and Grey Ranks. Man. Now I have to get off my arse and do something!

Find out more about the Fiasco Companion at Bully Pulpit Games. There are also a couple of reviews out already, at Critical-Hits.com and RPGmusings.com