I learnt recently that my kids play Doctor Who at school, which is cute, and funny considering neither of them have watched the show (which will be a topic for a future post). It did get me thinking about the games I played as a kid, particularly those based on favourite television shows. 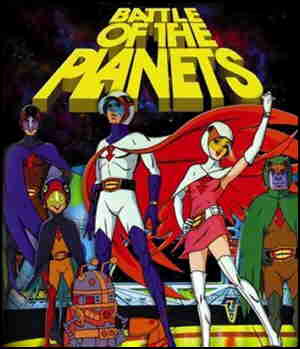 One of my earliest school memories is from waaaay back in Year 1 at the tender age of 6. My memory is pretty poor, so this must be an impressive life incident (so humour me and be impressed). I recall my friends and I playing G Force, which was what Battle Of The Planets was called on local TV back in the early 80’s*. I don’t know why it was called G Force**, maybe the word “battle” was too provocative for a children’s cartoon (or a cartoon in general, as “cartoon” and “children’s television” were pretty much synonymous). Having known the show as “G Force” really messed me up when Disney released this hamster-filled flick. Frankly, I don’t know why they ever changed its original Japanese name, Science Ninja Team Gatchaman. Now that is a cool name, totally suitable for children’s television – it has Science, and Teamwork, spiced up with Ninjas and… gatchaman…

As I recall our games of G Force mostly consisted of everyone arguing over who would get to be Mark or Jason. I assume this was provoked primarily because we perceived these characters as being the “coolest”, not because the alternative was to be the little guy, fat guy or girl. Actually, it is interesting that I remember the names Mark, Jason and Princess, as wikipedia (source of all quality information) is telling me these are the names used in Battle of the Planets, not G Force. Maybe Australia got some messed up amalgamation of the two.

As a kid, this show really captured my imagination, and I spent hours pretending to be a part of the G Force. I am sure that a desire to dress like a duck had something to do with the appeal, too. (What do you mean it was meant to be an eagle? The uniform was white. I will accept goose.)

A couple of years ago I picked up a DVD of Battle of the Planets, and while it was obviously dated it was still charming.

I get a real kick out of thinking my kids are doing the same thing I did as a child. I love the fact that the cubby house in the playground is their TARDIS. I just wonder who gets to be the Doctor.

*On preparing to write this article I discovered that G Force was another interpretation of Science Ninja Team Gatchaman, seperate and distinct from Battle of the Planets. But I will continue to imagine them one in the same.

**Yes, I know the “team” of young defenders was called “G Force” and the show title was obviously based on this. But that is not the point I am making.