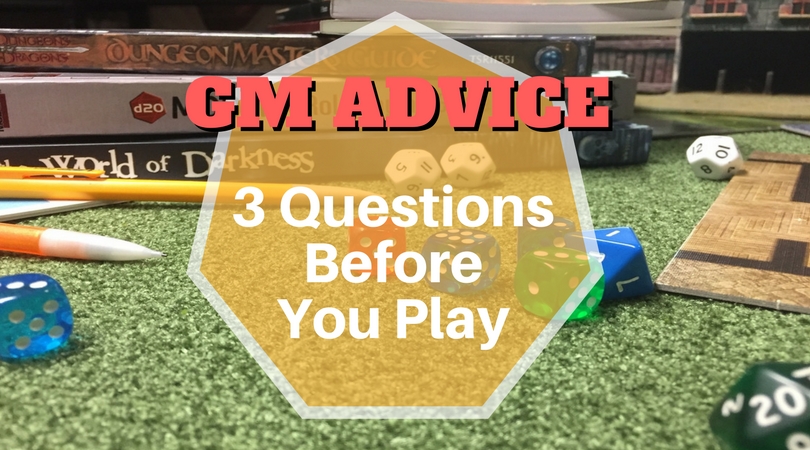 Starting a new roleplaying game is always exciting, but, as keen as i am to just get into telling exciting stores, I always take a moment to address a few things. I like to kick things off with a conversation so everyone is on the same page. Even when playing with people I know really well i find this a useful exercise. To help me guide this conversation (and ensure I don’t forget anything), I keep three questions in mind;

1. What are the player’s expectations?

First and foremost, everyone at the table needs to be clear about why everyone else is here. Of course, you’re here to play some awesome RPG and tell cool stories, but you need to dig deeper! The other players might have a different idea about what they consider is awesome or cool, and you need to get that out in the open right up-front. If you don’t, there is a chance that some of your players will not enjoy the game as much as others. Ask some pretty basic questions about what everyone thinks is “fun”, or what they want to do in the upcoming campaign. You might be surprised by the variety of responses!

The other thing you must do is talk about boundaries, particularly in regards to how violence, death, romance and children are portrayed in your stories. These are often “hot button” issues and unless you have been playing with the same group for a very long time, you might unwittingly press some of those buttons. The last thing you want is to have your players feeling uncomfortable or leaving the session with these things playing on their mind. I ask the question straight out – “How do you guys want to handle the portrayal of violence, romance and kids?” If nobody immediately speaks up, I share my opinion (which is usually “We’re not doing any graphic violence or sex, and kids in general are off the table.”) Never ask a player to justify their opinion! If they say they don’t want sex or kids to be a central part of your stories, respect their wishes and move on. You do not want to go prying into their personal life!

2. What type of game are we playing?

This is a question about play style. Even if your group has come together to play DnD, or Call of Cthulhu, or The Beast of Limfjord, or any other specific game, this is an important question to ask. We all want different things from our games and it will avoid a lot of problems later if we address it right up front. If we just consider DnD, for example, there are so many different styles of play you might engage in. Are we heavy on character interaction and combat is going to take a backseat? Does everyone really just want to use their really cool class abilities? Do we want to explore dungeons and kill undead, or sail the high seas and fight big monsters? Knowing all this stuff up front will make things a lot more enjoyable for everyone.

Specifically, address the tone of your game, the scope of your stories, and the structure of those stories.

Tone refers to the mood you are all trying to set. Is it a riotous romp through a dungeon with jokes made about kobolds along the way? Or is is a grim-and-gritty game of supernatural horror? Talk about what that tone “looks” like in your game / setting. It is totally okay to discuss the common tropes, and get everyone’s opinion. “Yes, we want a game of gothic horror, so let’s have undead as a major threat!” “Yes, a game of intrigue and espionage is cool, but can we have it more like Mission Impossible and less like A Few Good Men?” Get everyone on the same page and establish the preferred mood. Once this has been agreed upon, try and keep everyone on track as you play.

Scope is how “big” your stories are going to be. Are you a group of fledgling adventurers trying to protect your home village from a nasty incursion of mind-controlling toads? Or will the outcome of your adventures affect the fate of entire kingdoms, countries or worlds? Are your adventures all going to be set around a single locations (or small area), or will you be travelling across the world (or stars) to complete your missions? These kinds of decisions will help players to develop their characters and their place in the world.

Structure is about how your adventures will play out. Most of us, when beginning a campaign, are under the assumption that adventures will roll into one another into a long and continuous story, but that’s not the only way to do things. You could opt for a more episodic structure, where each adventure is its own, finite event with little connection to the last (other than the characters). Perhaps you will break your adventures into “seasons” (either literal seasons, or like they do with TV shows) – after a certain number of adventures or period of in-game time there will be a break for character training, or the advancement of the timeline. If you only intend to play for a specific amount of time, say that up-front, too – “We’re going to play a short campaign where you are looking for the last heir of the Empire, then we’ll be done.” Consider, too, at this stage, what will happen when one player cannot make it to a game session – does the GM control them? Do they stay back at “the base”? Are they considered to tag along but not play a role?

3. Who are the characters?

Address this question after the other two, but definitely before everyone makes their characters. Discuss how the characters might know each other and where / how the campaign will begin. This, in conjunction with the answers to the previous questions, will provide the players with a really clear idea of what the game will be about. If there are any unique requirements of a setting (“No gnomes!”, “Everyone is some kind of spy.”), make sure you lay that out clearly.

Knowing where the story begins / how the characters might know each other / why they will be working together is an important bit of info for players to know in advance. Don’t spring it on them as a surprise once the characters are created! Will they all be the crew of a ship (sailing, space or otherwise!), or a band of mercenaries, or in the employ of a guild or political organisation? Perhaps they all grew up in the same town, or maybe just ended up on the frontier in search of work and/or riches.

Ask all the players what kind(s) of character they are interested in playing. Have everyone share their ideas and get things out on the table before the mechanical elements of character creation begin. Some players may be inspired by another player’s suggestions and want to play off that (“You want to be a noble knight moving from tournament to tournament? I might be a bard who is following him around!”), while other players like to be the only druid/elf/thief in the village! You might also discover that nobody wants to be a spell caster, or everyone wants to be a Jedi, or some other unusual composition of characters. This is great information to have before the game begins and you can address it right there, asking players what this might reveal about the setting or coming adventures.

I like to discuss all this stuff either well in advance, or at the start of a session where I know there will be plenty of time for character generation and play. Ideally, I try to get the players together in advance and discuss this stuff face-to-face, but you could use a Facebook group, G+ or some other forum to address it all. Discussing in advance allows players to absorb the information and develop their character. It also allows you, as the GM, to incorporate all their players feedback into your planning for the first session.

Once everyone is on-board with the expectations, types of stories and variety of characters, you can all get into character creation and prepare to play!

What do you do when beginning a new campaign? What advice would you give other GMs?