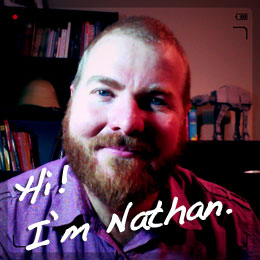 Nathan Russell is an award-winning game designer, fiction writer and prolific blogger. He teaches high school English and drama, is a freelance writer, blogs for brands and publishes his own games. He is currently working on a number of fiction and game design projects and blogging about travelling with autism at Autism Family Travel.

He graduated from the University of Newcastle in 2003 with a triple major in Education, English and Drama. In 2005 he won the inaugral Ronnies for his satirical roleplaying game Space Rat: The Jack Cosmos Adventure Game. In the same year he founded Peril Planet Entertainment, which has since published more than a dozen games. His has written for White Dwarf, Fenix and Bully Pulpit Games, among others.

Nathan created and co-hosted the popular tabletop gaming podcast Here Be Gamers! from 2008 – 2012. In 2009 he co-founded The Stockade Project to support the burgeoning Australian independent game design community and in 2010 he established National Game Design Month, an international event for game designers.