Planetfall is a series of articles about my ongoing sci-fi roleplaying campaign. Each instalment brings you insight into play and game mastering, along with some useful resources.

With our characters created and a good sense of place established, it was time for us to actual play our first session in the Planetfall campaign. This first session was essentially a “getting to know you” session, where players got to take their characters out for a test drive, and we all got to grips with the essential elements of the system. As I hadn’t run d20 Modern in a really long time, I was not sure how long combat would take, or how deadly it would be, so I kept things simple and planned a single combat encounter and a second one where the players would have to use their brains and non-combat skills.

At the very end of the character creation session I ran a brief encounter where the players were attacked by a large insect that swooped from the trees and raked them with talons. The colony leaders have identified the creature as a Swoop, which tends to nest in large family groups and breed quickly – which will be a real pain for the colony. The characters were charged with retracing their steps, finding the swoop nest and eradicating the bugs.

The characters used their stealth skills to wander the forest and search for the nest. Everyone kept deferring to Jayden, the soldier who had been seriously weakened by the cryo-sleep process, under the misunderstanding they were a military expedition. This lead to a humorous moment later when they realised they didn’t have to follow his half-baked orders. They eventually found the nest and destroyed the insects relatively quickly. The only injury was to Jayden, who has also been seriously wounded by them in the previous session.

Combat in d20 Modern moves quickly, and can be deadly. I was very aware that first level characters could die very quickly, so pulled my punches in a couple of instances – just enough to keep things dangerous, without causing too much bloodshed. 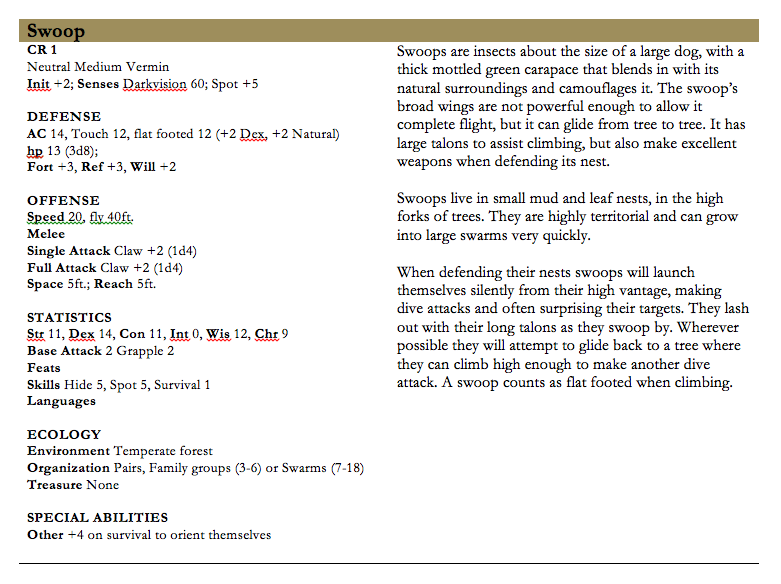 As the characters finish dealing with the swoop nest their iCoNs come alive with a garbled, but frantic distress message. A near-by patrol has had an accident and needs immediate assistance. This encounter had several small, related parts to it. Each was aimed at a set of skills or interests of the characters.

Fast drive along the narrow, rough track (CR1): Driving quickly (Drive skill check, DC15) will get the characters to the accident site in good time. Driving recklessly fast (DC20) will get the characters to the site before the driver’s situation becomes serious, granting a +2 bonus to the first aid check. If the characters don’t drive with urgency, or fail the Drive check, they arrive just in time to see the Utility slip further over the edge of the ridge, increasing the difficulty to secure it.

A precarious position (CR1): The characters arrive at the accident site to see the patrol Utility has skidded off the road and into a tree at the edge of the ridgeline. The tree is all that is stopping the vehicle from tumbling over the side of the steep mountain. The vehicle is seriously damaged and precariously balanced. The driver is injured and one of the passengers has been thrown free of the vehicle and down the ridge. Another passenger is injured and dazed, standing to the side of the utility.

The characters will need to stabilise the vehicle or winch it away from the edge before they can assist the driver.

Down the mountain (CR1): Another passenger was thrown from the utility and down the mountain. It is precariously steep and covered in tall trees. The passenger is about 30 metres down the hillside, with head injuries and a broken leg.

Players will need to come up with a way to reach the passenger and bring him back up the hill.

Things started out poorly with Tom (the transporter) driving at break-neck speed and, well, almost breaking everyone’s necks. They made it to the accident site, though and dealt with the situation quite efficiently, working as a team and using their brains to overcome the problem. In the end they rescued the patrol members, fixed both vehicles and got back to Wilson’s Landing. I was worried that DC15 tasks would be too challenging for 1st level characters, but as each one was aimed at something a character could do well, it wasn’t such a problem. The Action points were also handy, allowing players to boost their rolls if necessary.