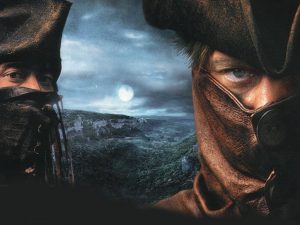 This week’s inspiration continues exploring the more fantastic inspirations for Verge. Brotherhood of the Wolf is a 2001 French film, about a series of mysterious and deadly beast attacks that occur in 18th Century France. It is an historical drama with strong elements of mystery, horror and fantasy and based on the legend of the Beast of Gevaudan. This movie is gritty, dark and has some truly awesome fight scenes. The main character wears what I personally think is the coolest trenchcoat to ever grace the silver screen and an early scene sees him engaged in a stunning martial arts fight while wearing said coat and tricorn hat. The bits that inspired Verge, however, are the dark mystery, plots-within-plots and juxtaposition of the rich, indulgence of French aristocratic life with the visceral horror of the beast attacks, murders and other savagery in the film. A lot of my early writing on Verge referenced “revolutionary France” in terms of clothing style, and this was definitely because of this film. If you have not seen it already, you should check it out.