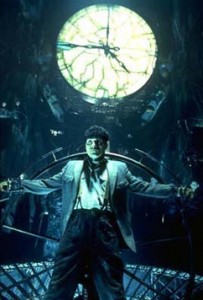 This week’s inspiration is perhaps an obvious one, but an important one. It is the 1998 film Dark City, directed by Alex Proyas. When I first saw this film it had a huge influence on me – I loved the dark noir-like feel of this almost familiar city, the sinister mystery that formed the centre of the plot, and the nefarious antagonists. I won’t even get into how it further stoked my infatuation with Jennifer Connelly! This film presents a city that is inescapable, but where most of the inhabitants are totally unaware of the fact – the idea of leaving doesn’t even cross most people’s mind. It is a giant maze, an experiment in which the populace are merely lab rats. The city is huge, industrial, impersonal, and dark with only the occasional neon flicker. I love the fact that the “bad guys” are named after everyday objects (Mr Book!), and the giant clock is an image that just fires my imagination. There are schemes and machinations that involve the entire city, but almost everyone just lives out their monotonous lives unaware of the dramatic changes that are going on around them. 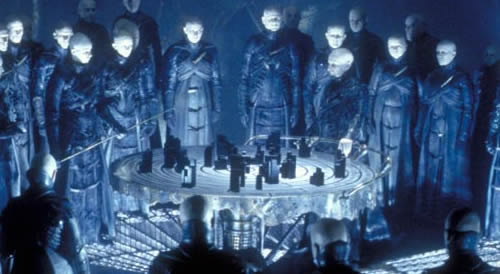