A lot of people ask “Where do writers get their ideas?” I thought I would share an activity I am currently doing with students, that relates to just such a question.

At the moment my Year 10 English class is tackling the science-fiction genre. So far they have really got the point that science fiction is about ideas. We have explored common themes in science fiction and identified films and stories that tackle such themes. We have brainstormed common tropes, and covered the difference between “hard sci-fi” and “space opera”. We have also explored the idea that science fiction can be built upon the question of “What if?”, where a writer might see or read or hear about a particular innovation, discovery, social movement, technology or agenda and extrapolate an idea.

Now the class is up to the point in the term where we are going to write our own science fiction stories. We began by searching the internet for articles about scientific discoveries, picked a few that caught our attention, and then tried to ask a “What if” question about each. Here are some examples of what we have come up with, all based on real news articles students found:

Our next step in building our science fiction story is to pick one of the questions and brainstorm / mind map responses to it. The key is to just let our imaginations go wild, writing anything and everything down, adding new thoughts to previous ideas. Here is what my class came up with for the question “What if the internet stopped working?” 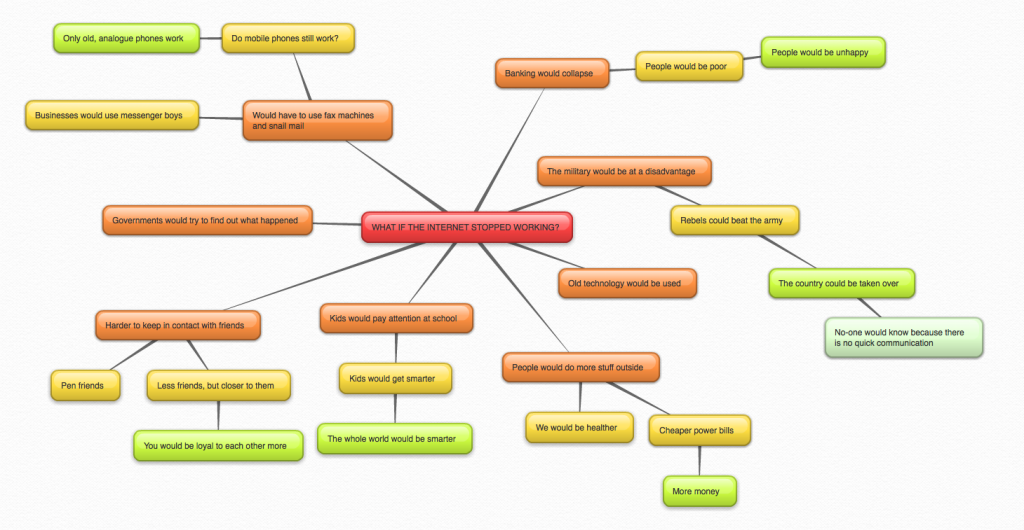 There are a whole bunch of ideas here, some of which have been followed through several steps, while others are have not. Some of the branches contradict each other, while others could dovetail neatly into each other. Now, we can look at the mind map and see if any interesting thoughts have developed, and then ask more questions about that specific branch of the mind map. We could look at the longest branch (the failure of the military that leads to a rebellion and no-one knowing about it), the shortest (the government tries to find out what went wrong), or something more quirky (the whole world gets smarter). This gives us a starting point for our science fiction setting.

The next step I intend to get my students to complete is to pick a branch and brainstorm specific problems a person – a single individual –  could have in that setting. For each problem, they are to come up with things the character might do, and things that might happen to the character. This will help put a character into the picture, present a conflict, and maybe even a resolution to the character’s story. Here is a quick example: 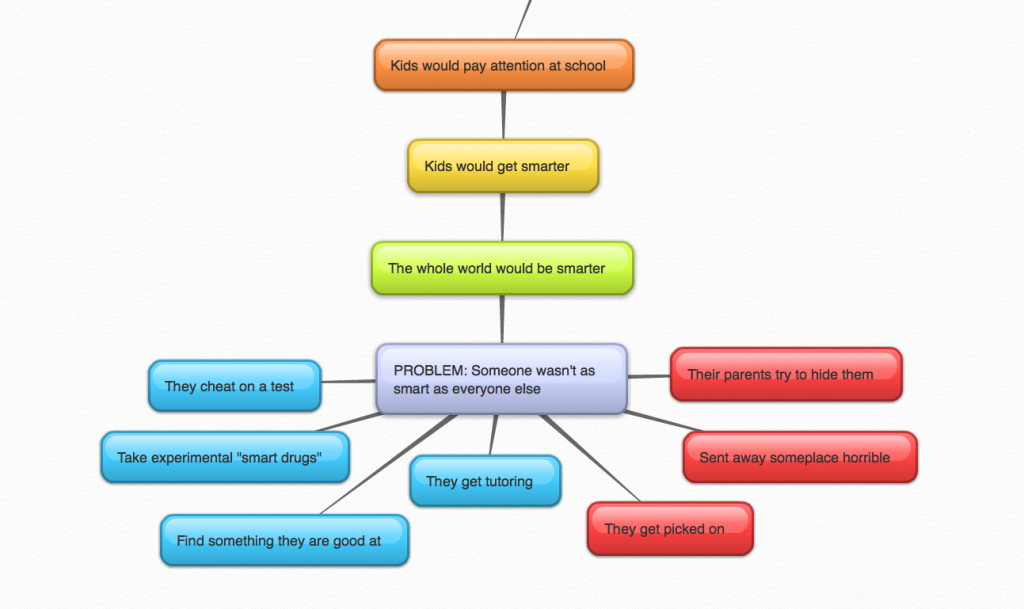 At this point, students will have a whole pile of ideas to draw from. And the ideas are all extrapolated from a single real idea. Actually writing the story is a whole other matter, but that’s not the point of this particular exercise!