A while ago I posted some pics of the jungle terrain. Today I am going to go over how I made it. It was a relatively straightforward project, and I was able to create enough terrain to fill a 6’x4′ table in about a week of afternoon work.

I had been collected the bits for my jungle terrain for a very long time. I had plastic grass tufts that I picked up sometime around the year 2000, and Easter Island heads that were MacDonalds promotions back when the film Night At The Museum came out (2006, apparently). In fact, it was my growing collection of bits that prompted me to finally get the terrain done.
In the end I had a good pile of fake grass and a variety of other fake plants, some sticks and twigs, flock, sand, and pine cones. I also had a heap of  old boardgame boards, which I used as the bases for my terrain.

As far as tools, I stuck with the classics – clippers, scalpel, super glue, wood glue and paint. 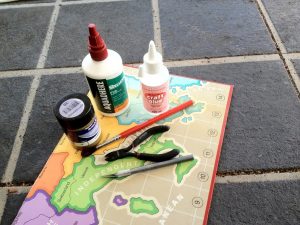 I was pretty happy with the colours of the fake plants and so made the decision that I would not be painting them. The sticks and twigs were also appropriately stick-coloured! I gave the Easter Island heads an undercoat of black and a couple of dry-brushes of grey and they came up great, too.This meant I could cut and paint the bases before applying the actual jungle.
The bases were cut into irregular ovals between three and eight inches long and of varying lengths. I wanted some terrain to be narrow “barriers” and others to be “clumpy”. I started cutting the game boards with the scalpel, but in the end scissors were easier and quicker. All the bases were then given two coats of brown paint (from a tester pot bought from the local hardware). I was worried that the board would warp with a lot of paint and glue, but they have turned out fine. 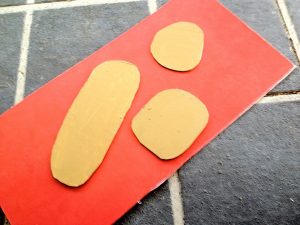 This was the fun bit. I took all the plants and sticks and other bits I had and started gluing them to bases in a semi-random fashion. My goal was to have a variety of plants and other objects on every base, and to try and vary the height and width of objects used. This variety helped create a natural look to each jungle base. I usually began with a single central feature, such as a tree trunk (stick), stone head, or large plant. Then I slowly added other plants until the base was filled.
I kept a few miniatures of different scales to hand, so I could also take a look at how the terrain looked “in play”. It also allowed me to leave gaps and clearings for models to stand in.
All the material was attached to bases with wood glue, though I did use a few dabs of superglue to keep some plants in the right spot while the wood glue dried. I would have used my hot-glue gun, but it went missing after a terrain-making day for my local club and I haven’t got around to getting a new one.

When the glue was dry I dribbled more wood glue around the bottom of all the plants and applied a mix of sand and flock. The goal was to hide the plastic tabs from the bottom of the plants and really make sure everything was thoroughly glued to the base. The effect was mounds of dirt and plant debris piled under the shrubs and bushes, and I think it looks pretty good. 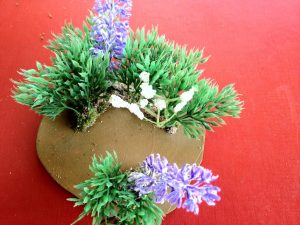 I decided the bases were finished at this point, though I am in two minds about whether to flock / sand the whole base. As they are currently, the brown works quite well and actually matches one of the cloths I use on my game table (a total accident!). I am also concerned that the bases will warp if I go apply glue to the whole thing.

And that’s it. An entire table of jungle terrain built over a few leisurely days during my holidays. 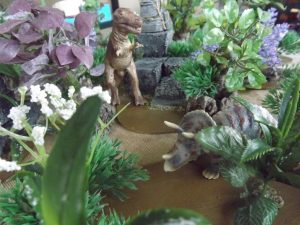 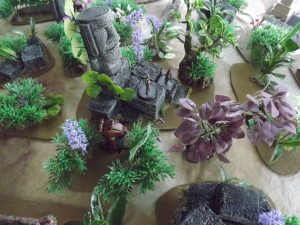 It’s a jungle out there!