I have been in two minds about saying anything about this, but the more I think about it, the more it just pisses me off. I was flipping through Wargames Illustrated #300 a couple of weeks ago (it takes a long while for it to hit the newsagent shelves here) and enjoying the celebration of 300 issues of one of the few magazines I still buy. Then I came across an advertisement for Battlefront’s Flames of War that caused my jaw to drop. It was advertising the new introductory game “Open Fire” and one full page of the double page spread had an attractive young woman posing with a box, stomach bare, making the suggestion that she was topless behind it. And, just in case I was not sure that the young woman was being objectified, the image is accompanied by the caption “Girl model not included”. WTF?

I’m no prude and indeed own my fair share of scantily-clad miniature figures, but I really found the ad unnecessary and inappropriate. As the father of three kids (including two girls) who I hope will be life-long gamers as I am, this is the last thing I expect a mature, successful gaming company to be doing. What was the point? Who was the target audience? And why advertise to people that think this kind of thing is okay? It didn’t make me want to go and buy the game, but it did make me close the magazine.

Now, I am not under any mistaken assumption that the ad was aimed at my kids – they are too young to be interested in Wargames Illustrated at the moment – but they might well want to read it one day. As a father who is trying to encourage his daughters to play games and get involved in the awesomeness that is the tabletop gaming hobby, I see such advertising as counterproductive. I want to be confident that the manufacturers and publishers of great games take the future of our hobbies seriously, and see them as a pursuit available to everyone. I want to support companies that recognise that women and girls are as much a part of our hobby as are the adolescent boys I can only assume Battlefront were trying to appeal to.

I am not sure why I am so upset – I was going to write “annoyed”, but the emotion is much stronger than that – by this advertisement. It’s hardly the first scantily-clad woman used to sell a gaming product. I think it is because the ad was so unexpected. Wargames Illustrated is a mature (as in, established) magazine for gamers that are interested in the painting of figures and playing of games, and the recreation of great battles from history. Battlefront is a company that has been single-mindedly focused on the creation of a great set of historical wargames rules. The whole thing baffles me. Maybe I am a prude, as a quick internet search could only find one reference to the advertisement (where the below image comes from). Or maybe not enough people have called Battlefront and Wargames Illustrated out yet. 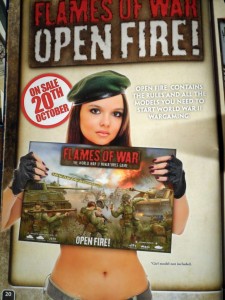 Is the “Girl model not included” really needed?