I have been enjoying playing a wargame called Bolt Action lately. It is a set of rules meant to recreate the action of World War II, but they are easily “portable” to any genre or theatre of war. As a bit of a fan (read – huge fan) of Star Wars I have been collecting Rebel and Empire miniatures for quite a while. Yesterday I decided to crack them out and play a game of Bolt Action (okay, lets call it Blaster Action) with them.

My daughter, Matilda, was my oponent. As this was the first time she had played Bolt Action, I kept things simple with very similar units on each side.

I was the forces of the Empire, fielding:

Matilda had a band of Rebels:

*There is a slight points discrepancy as I had originally given Matilda 2 units of 10 Rebel soldiers, but when deploying she set them up in three groups, so I through in an extra heavy blaster to make three identical units of 7. In hindsight, it gave her more draws from the cup, keeping her interest a little more, so it was worth it. 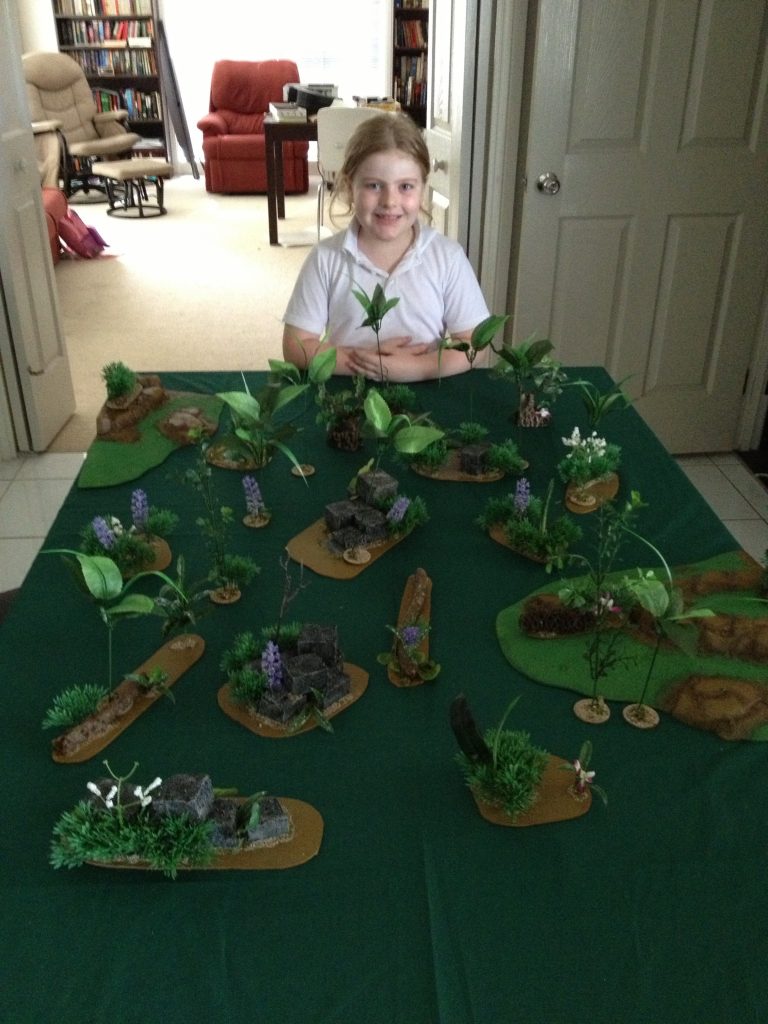 We set up the battlefield with lots of jungle thickets. You could see through it as normal, but it was treated as rough ground. 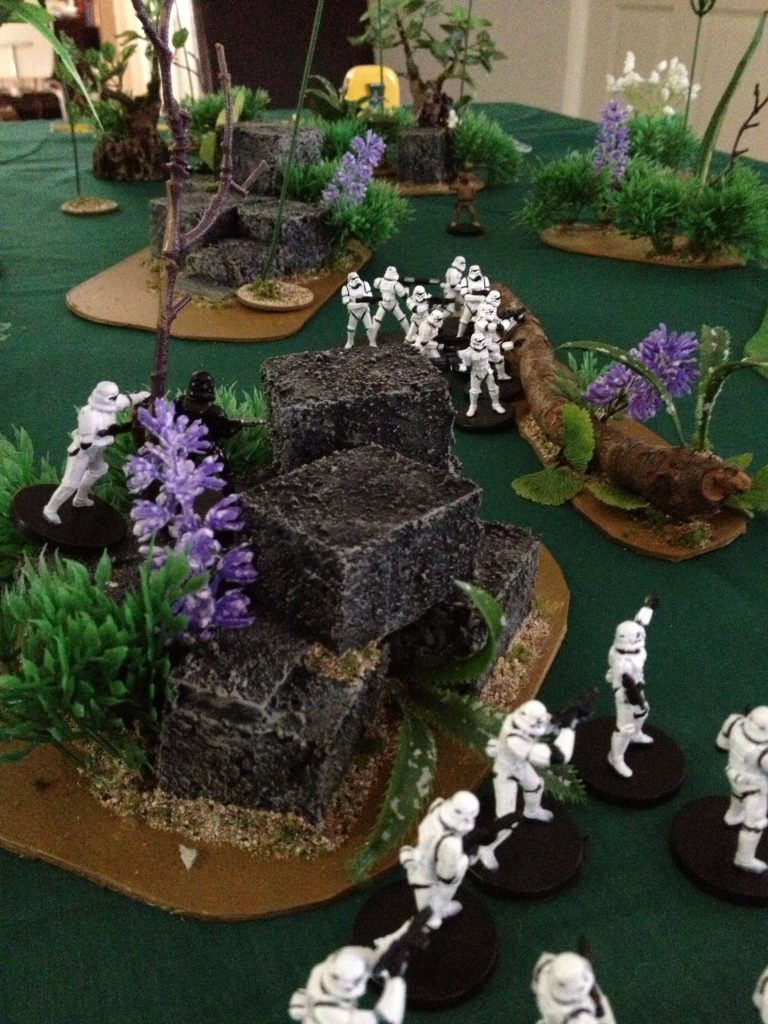 The Imperial Storm Troopers spread out across their side of the battlefield as best they could. The sniper was centrally located. I scored the first few activations and threw everything I had at one unit of Rebels. 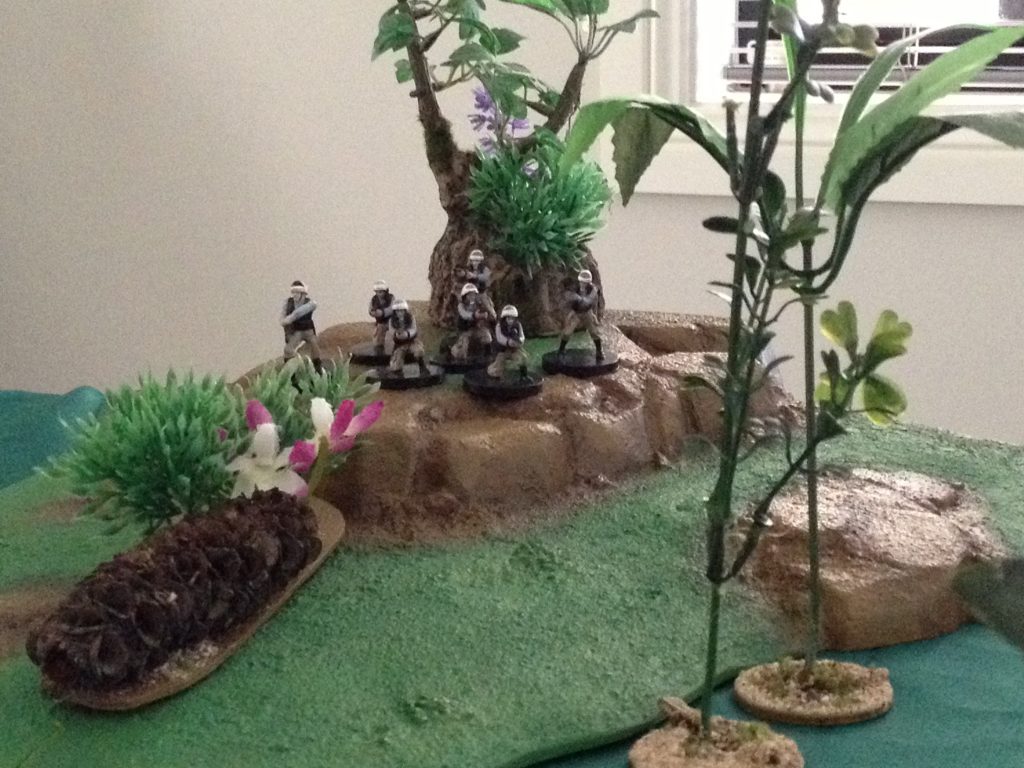 This unit of rebels had a fantastic position and could see the entire battlefield. So I shot them with everything I had, reduced them to half strength, and they ran off the battlefield. I felt mean, but if I’m not mean to my own kids, who will be? 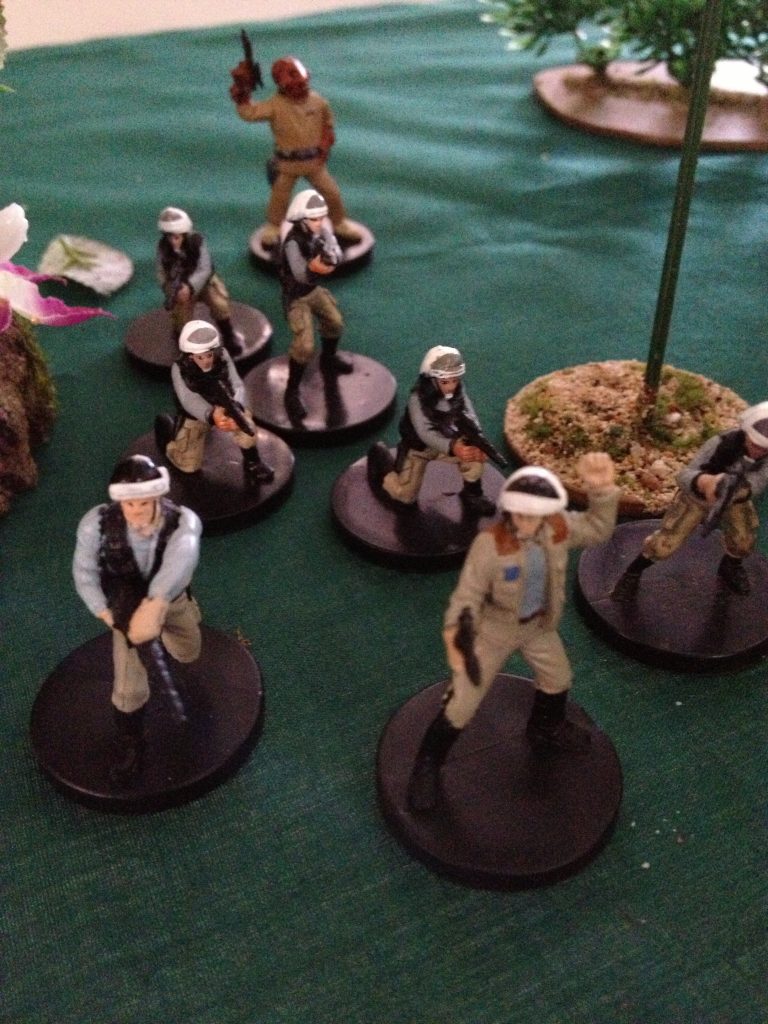 A unit of Rebels, backed up by an officer (is that Admiral Ackbar?!) advance on the Imperial position, making good use of cover. 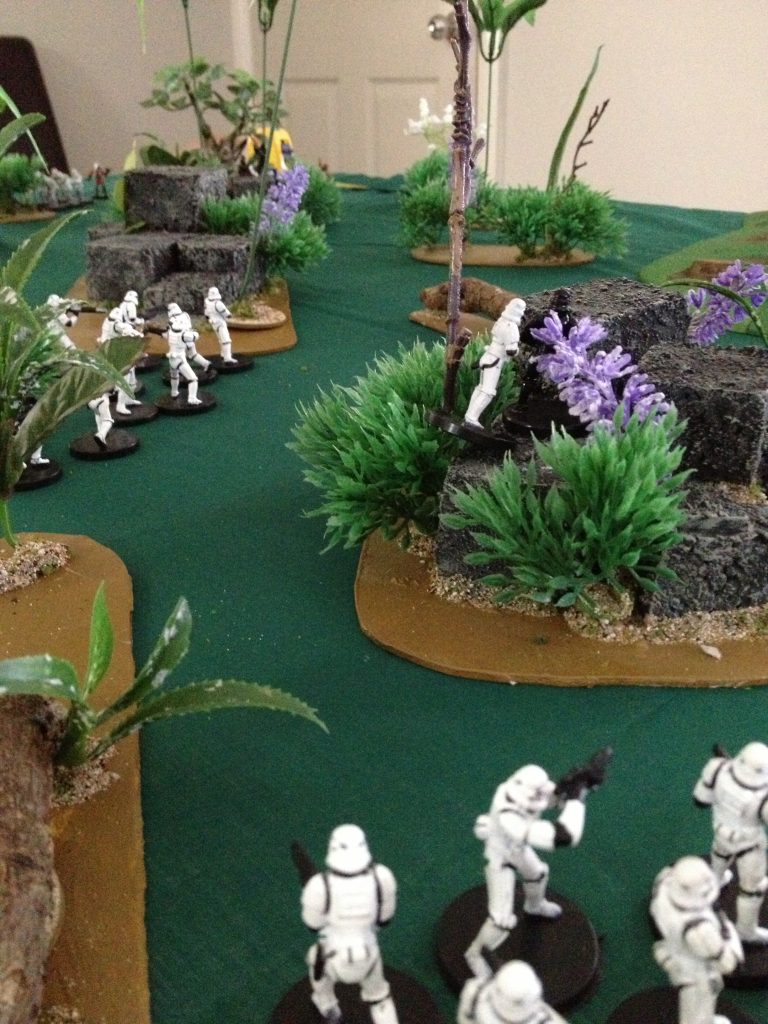 At the start of turn 2 the Empire is advancing on one flank, while the Rebels advance on the opposite flank. The Empire is forced to keep a unit in the centre of the table to “hedge their bets”. The Storm Trooper unit on the left flank has taken its first pin and never fully recovers. 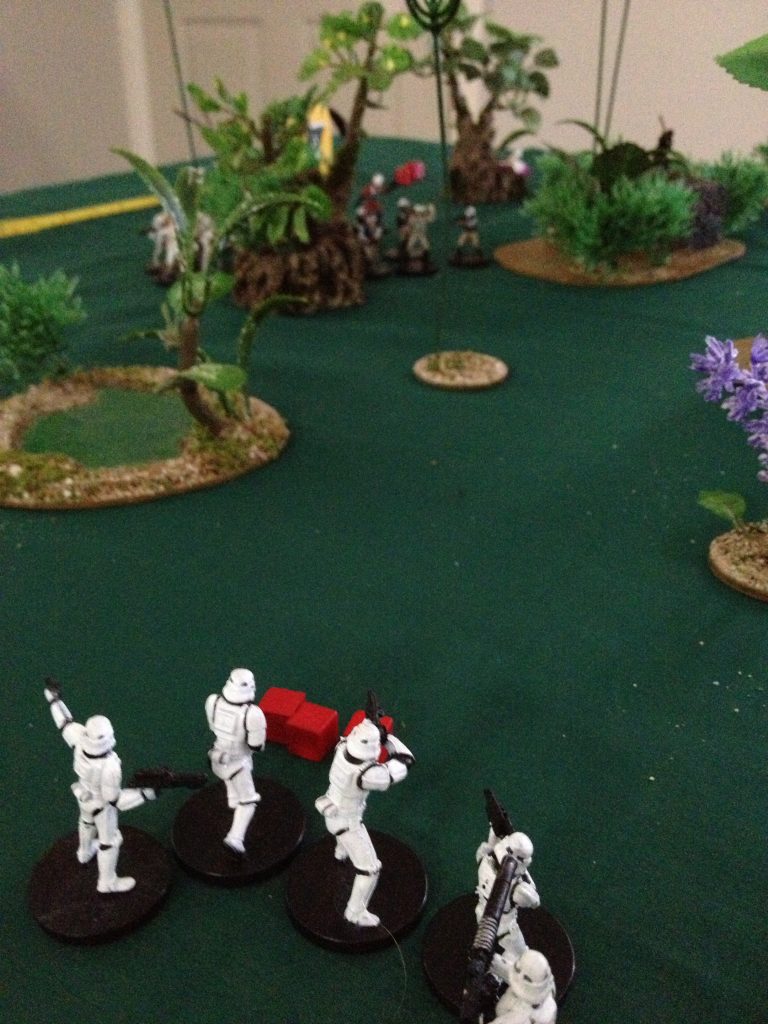 Here is the Storm Trooper unit on the left flank. Managed to reduce their pins down to 3 (!) and try to shoot the advancing horde of Rebel soldiers and Commandos (backed up by a Medic). They never really stood a chance! 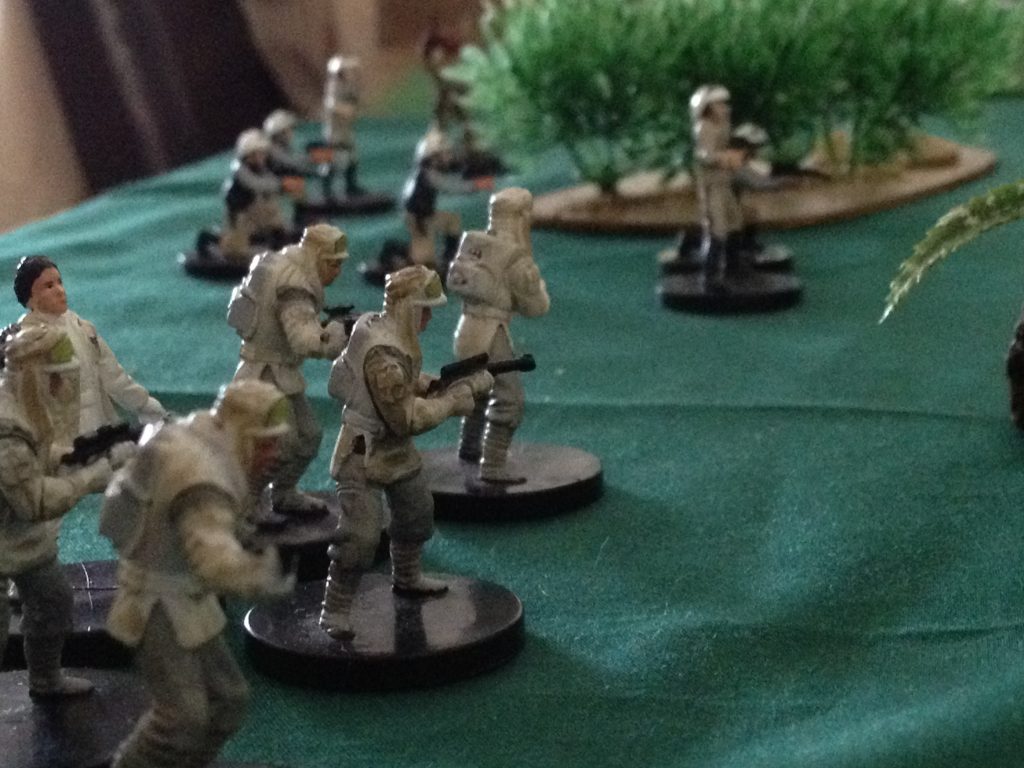 The Rebel Commandos advance. They cunningly disguised themselves as Hoth troopers in order to fool the Empire into thinking they were not that clever. 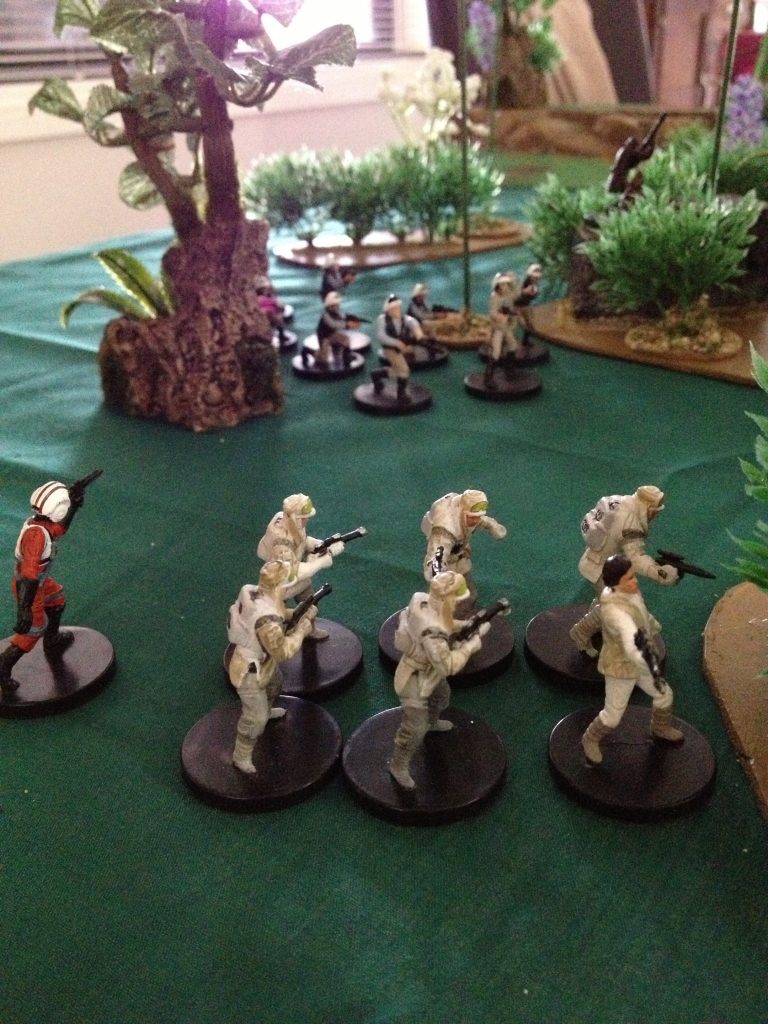 A downed pilot makes himself useful as the platoon’s Medic. This untrained fly-boy is about as useful as any trained Medic in Bolt Action, though he did save the Commando NCO on one occassion! 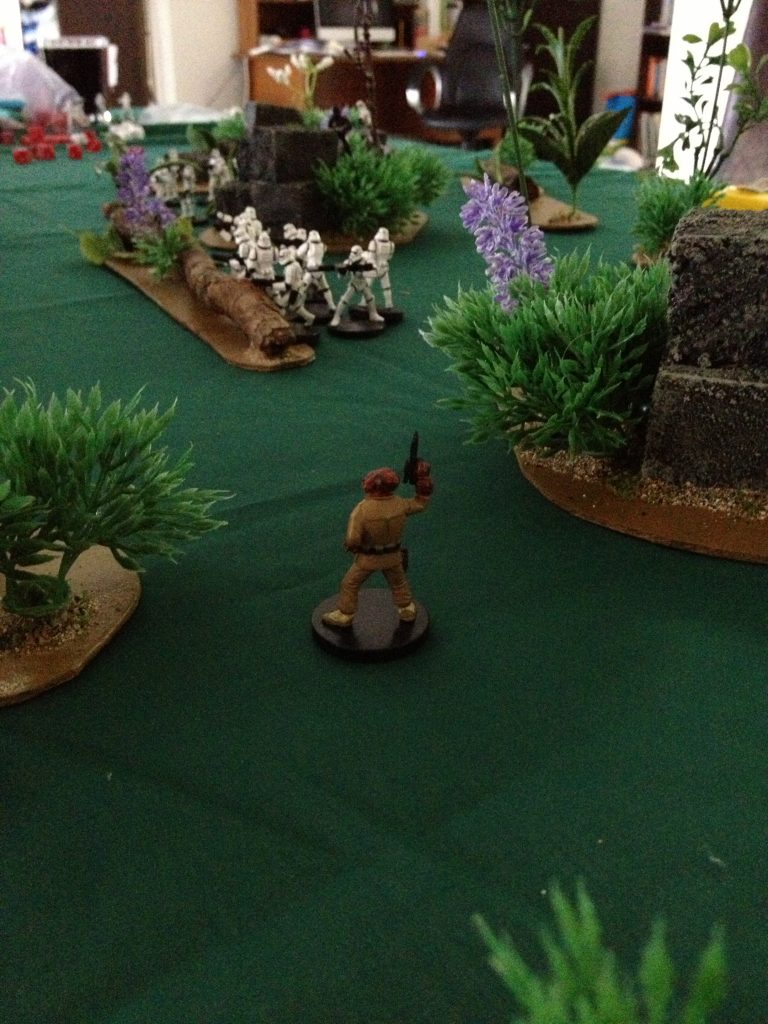 Admiral Ackbar gallantly takes a pot-shot at a unit of Storm Troopers, before running behind cover again!

We played three rounds, and when the dust cleared both sides had taken about the same casualties. The Storm Troopers on the left flank were shot to pieces, and the Rebel soldiers on the opposite flank had to be charged as they became pretty much impossible to shoot. A unit of Rebels and Storm Troopers met in the centre of the table, drawing the first round of combat (3 casualties each), before the Imperials finally got the upper hand – but they lost 6 models in the process, including the NCO (I foolishly wasn’t paying attention and took him off in the heat of battle!).

In the end, the game was a draw. A very enjoyable draw. I was particularly proud of my daughter, as she gave it a good solid go. She is only seven, so each activation she would choose a unit to activate, I would give her the available (logical) options and she would choose what to do – most of the time she did exactly what I would have done, so that’s pretty good! Even when she did crazy stuff (Admiral Ackbar is doing what?), it didn’t adversely affect her, so she has apparently not been burdened with my shocking luck!

The Bolt Action rules worked brilliantly for this game. I didn’t have to adjust anything, just run the units as “counts as”. It helps that all the infantry have the same basic cost, no matter what the army. I am thinking of basing the Empire forces on the Germans to take advantage of the decent squad weapons (assault rifles, panzerfaust etc), and the ability to replace fallen NCO’s. I am not sure who I would base the Rebels on. I have lots of “rebel scum” models which might work well as inexperienced troops, so perhaps I will field them as Russians. The Rebels never struck me as having much artillery, but they did have lots of air support, so maybe the US is an option, too.

I am waiting on an order of Star Wars figures – heavy weapons for the Rebels, so I can field my AT-ST, and maybe (one day) my AT-AT. I will have another battle when they turn up.

Bolt Action players, what would you have the Rebels and Imperium “count as”?