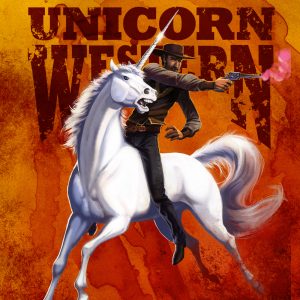 While I was on holidays I had time to read a few books, including a wacky fantasy-western called Unicorn Western by Johnny B. Truant and Sean Platt. This short story (well, episode) is literally about a cowboy who rides a unicorn!

The idea of a unicorn-riding cowboy was so stupid it sounded right up my alley – and I was not disappointed! This is just good fun pulp adventure, filled with classic western genre tropes and the outrageous addition of a rainbow-bleeding, wisecracking unicorn. I am a big fan of genre mash-ups, particularly weird, off-the-wall ones, and this was spot on. It’s like Clint Eastwood meets My Little Pony, with a serious dose of bad attitude.

Clint (yes, the main character’s name is Clint..) is the tough loner out of every western film you’ve ever seen and Edward is a magical, smart arse Mr Ed (just don’t let him hear you say it!), and together they are a pair of heroes I want to read more about. The story moved at a good pace, filled as it was with bad guys, weak willed towns folk and the threat of maximum violence at every turn. I loved the little hints at a much bigger world, with a lost magical city, “stew holes”, and marshals who wear “seven shooters”!

Unicorn Western is the first episode in a serial, and when I started I was worried that it would be little more than a teaser. While a quick read, it was a satisfying and entertaining one. I have to admit though, I want more!

You can check out the Unicorn Western series on kindle here!