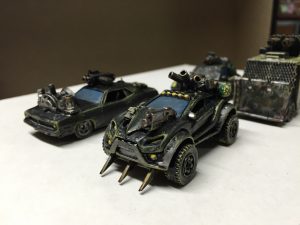 This is first in what I hope will be a regular series of design diaries! A few months ago I posted some pics of my post-apocalyptic vehicles that I built after watching Mad Max: Fury Road. I then immediately wanted to play games with them, and set about looking at what rules were available. There were quite a lot, from classic Car Wars to Outrider, Dark Future, Gorka Morka, Rush N Crush and even a great old board game called Thunder Road. None of these were quite what I was after, either too complex (requiring Mathis (!) to build vehicles or make turns), or two board game like, rather than wargames-ish. So I set about writing my own set, tentatively titled “Apocalypse Road”. (To be honest I was originally going to call it “Thunder Road”, which is when I discovered the board game with the same name!) 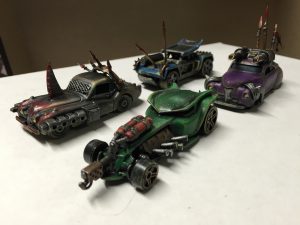 My original concept was a tabletop wargame where each player controlled a convoy of rag-tag vehicles from the wasted future. Vehicle creation needed to be quick and intuitive. Games needed to be fast. I wrote up a basic draft pretty quickly and played a number of games with my daughter. We had some fun destroying each other’s vehicles on the kitchen table! The key features of the rules were a “range tool” that made movement, turning and determining line of sight quick and easy, and the use of different polyhedral dice instead of dice modifiers. It made play quite fast. It wasn’t perfect, though, particularly vehicle design which still verged on a “Car Wars Lite” system.

This week, I revisited those basic rules in preparation to write a clearer version in preparation for an “unpub” event at the end of the month where designers will share their games for feedback and play testing. However I have realized that I may have made an oversight in my original design brief. This is the advantage (or danger) of taking a break after doing some basic design work. It gives your analytical brain a chance to catch up with the creative part and look at thing in a fresh way. 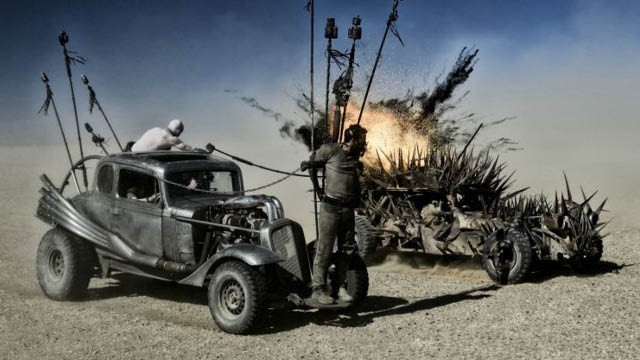 Those first basic rules were written purely to get my cool models on the table. They were also heavily influenced by what was and was not already “out there”. Now, though, I am asking myself “What is it about Mad Max that I love so much that I want to see emulated in my game?” Here is my list of “cool stuff I want to do in a game of mad vehicles in the wastelands of the blasted future”:

To be honest, that’s about it. These are, to me, key features of the Mad Max car chases. In Mad Max there are many, many destroyed vehicles before the hero wins. The weapons are improvised and often “one shot”. The combats take place over many miles of road (or desert etc) before they end.

My first draft rules do not emulate this very well. They take too many cues from other car combat games where the vehicles are well armed and you track damage and ammo and the abilities of the driver. Interestingly, the board game “Thunder Road” does all of these things pretty well. Hmmm, food for thought.

For the moment I am going to just let all these ideas wash around in my head. I am going to try and not get caught up in specific rules solutions yet and try to focus on how to create the right tone of play. I want something that is beer-and-pretzels in terms of play difficulty, and good-natured “screw your friends over” in tone.