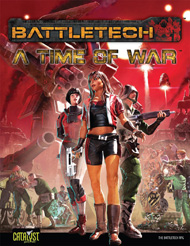 I joined a game of Battletech: A Time of War recently and was surprised to find that nobody was playing the role of the iconic mechwarrior. It was particularly surprising as we had been told that every character would need at least some skill in battlemech piloting. This got me thinking about other RPG’s I have played where there was a distinct absence of the iconic character roles.

This particular instance was strange, to me at least, as everyone needed ‘mech piloting skill and the obvious choice would have been mechwarrior or battle suit pilot, but not one of the other five players was playing anything of the sort. I know that the RPG-side of Battletech offers many opportunities for adventure and role-play beyond giant-robot-fighting, but this campaign was set up with the expectation that giant-robot-fighting would be a central feature.

I have encountered a similar thing when playing Star Wars games set in the prequel or Old Republic eras, with nobody playing a Jedi. What the hell? You can be a Jedi! I don’t care how cool you think Han Solo, bounty hunters or ewoks are, so much of the Star Wars mythology and so many of the storylines revolve around Jedi, why don’t we have one in our totally awesome story? Yes, there are obvious reasons to not include them, particularly if playing in the original trilogy era, I get that. But in the half dozen Star Wars games I have run or played in (I know, only a half dozen – what is wrong with me?) only once has a player been a Jedi. (And, as a side not, it sucked – curse you d20 Star Wars and your ridiculous need for so many feats/skill ranks to use a lightsaber! Makes me love the WEG rules even more!)

I have even encountered this phenomenon in DnD. I have been in groups – large groups – where nobody plays a fighter. Not one freakin’ fighter amongst twelve or more characters! Sure, there were paladins, rangers and barbarians, but the poor fighter was conspicuous in its absence. From memory, I think there was only one wizard in this group, too! What the…?

Other examples? Cyberpunk with no net runners, Shadowrun with no demo-humans (huh?), Conan with no barbarians (what?!) and Vampire with no vampires (don’t even ask!). All real examples!

Why is this? Why are we reticent to play these iconic roles in our games? When I was a kid “playing” Star Wars it was lightsabers all the way baby – so why is it when given the opportunity to play a Jedi (or mechwarrior or fighter) in an RPG we don’t take up these iconic roles?

Sometimes I think it is because of perceived imbalances in roles / abilities / rules. The DnD group, for instance, seemed to think the fighter was a bit bland compared to the other “fighty” options that could use two weapons or detect evil or whatever. (I don’t get it, I love the fighter!)

Why there was only one wizard in a group of twelve DnD characters? I suspect it has something to do with “niche protection” – players not wanting to compete for opportunities to shine. I must admit that I’m a fan of characters having their own specific cool thing they get to do – I don’t want to be at the table and competing with the other payers for opportunities to do cool stuff. I have played games of DnD, for example, where there was more than one thief (rogue, okay, rogue!) and a constant tension between the players over who would get to pick the next lock or perform the sneak attack on the guard. Yes, there are ways to differentiate characters of the same class, but often the thing that draws one player to a role is the same thing that draws other players to it, too.

Still, niche protection doesn’t explain why I have played so many games where there was a complete absence of the iconic roles. If everyone was coming to the table with their characters pre-prepared, there might be a chance they have avoided the “obvious” choices for niche protection reasons, but that can’t be totally it. I have a suspicion that, in the groups I play with at least, politeness is a major factor; players don’t want to appear to be demanding the spotlight. Jedi and mechwarriors are often the central characters in epic stories and I have a feeling that players don’t want to appear to be demanding the spotlight. I must admit that after a couple of sessions of A Time of War, where scenarios / missions have revolved around my character in her battlemech, I have become quite self conscious of my role in the story.

So, knowing this about player psychology and how it affects character choice, characterisation and play, what can we learn? For me, I think it speaks volumes about the need to have clear expectations about play; about the stories you intend to tell; about the responsibilities of all involved. I think a lot of the time GM’s (and groups) mistake describing a setting for establishing a table/social contract. I also suspect that a lot of groups have no idea what I mean by a “social contract” (Gnome Stew article here, Learn Tabletop RPG’s article here). It doesn’t matter what kind of game you are playing, or how well you know the players, it is always worthwhile (in my humble opinion) to have an open discussion about what each player wants out of the game. And it needs to happen before character creation occurs. Often, in our eagerness to start our awesome adventures, we skip this step and leap straight into character creation and play.

Have you played in games where there was a complete lack of the expected iconic character types? Why do you think this was? Do you talk about expectations prior to play?